The Cook County Department of Environment and Sustainability has received a federal cooperative award of $1.2 million to help bring community shared solar power to the region.

The Solar Market Pathways project was one of 15 awarded nationally as part of the U.S Department of Energy SunShot Initiative. Application for the cooperative agreement was made in coordination with the City of Chicago.  Additional partners include nonprofits Elevate Energy and the Environmental Law and Policy Center, and technical consultant West Monroe Partners. ComEd is also a member of the project’s Steering Committee.

A key goal of this project is to develop five to seven community solar demonstration sites for within Cook County.  The project seeks rooftop and vacant land properties to potentially serve as host sites for the pilot program.  While this grant will not fund the implementation of solar development, it will provide design, solar assessment and technical and financial feasibility analysis.  With community solar projects, there is no cost to the property owner of the host site and, instead, the property owner can benefit from lease revenue and/or reduced energy costs.

The goal of the Local Benefits Analysis is to scale up the simulated costs/benefits at a hypothetical community solar site to derive the total local net benefits of increased deployment of community solar projects within Cook County. The analysis is intended to include an assessment of the local benefits associated with the construction and maintenance of the community solar installations including job creation, economic activity and environmental impacts.

The Community Solar Business Case Tool provides a flexible financial model that projects the costs and benefits to the system developer and subscriber of a single community solar project. The tool incorporates administrative, transactional and customer acquisition costs for community solar projects into a publicly available model for the first time.

The timing for the release of this tool is excellent for Cook County residents, with community solar enabled by new legislation in Illinois and community solar emerging as the fastest growing segment of the solar industry in the U.S.

Part I of the Value Proposition Report was completed in May of 2016. The report summarizes the value proposition of community solar to potential solar developers and subscribers in Cook County, under regulatory constructs and market conditions prior to the Illinois Future Energy Jobs Act becoming effective. Working sessions were held with various industry groups to vet the representation of community solar cost and benefit streams to different stakeholders, including the National Renewable Energy Laboratory, GTM Research, the National Community Solar Partnership, and a working group local solar developers.

The Value Proposition Part I Analysis was extended to include utility impacts of community solar and reflect provisions of the Future Energy Jobs Act, which was signed into law in December 2016. Working groups of local and national stakeholders were assembled to discuss methodologies for quantifying utility impacts. Local stakeholders included project team members Cook County Department of Environmental Control,  West Monroe Partners, Elevate Energy, the City of Chicago, the Environmental Law and Policy Center, and Commonwealth Edison, as well as representatives from the Illinois Commerce Commission, the Illinois Power Agency, and PJM. National stakeholders included representatives from the National Renewable Energy Laboratory, the US Department of Energy, the Smart Electric Power Alliance, the Regulatory Assistance Project,  the Pace Energy and Climate Center, the Natural Resources Research Institute, Synapse Energy, and Sacramento Municipal Utility District. The report was completed in April 2017.

This document analyzes the potential bill crediting processes for subscriber management of a community solar project.  A bill crediting mechanism has been a barrier in planning the implementation of demonstration pilots, with manual or fully automated processes being too burdensome for the utlity.  During this analysis, a semi-automated process was developed that proved to be significantly less costly.

This is an analysis of the barriers, potential resolutions and recommended next steps for community solar to develop in Cook County. 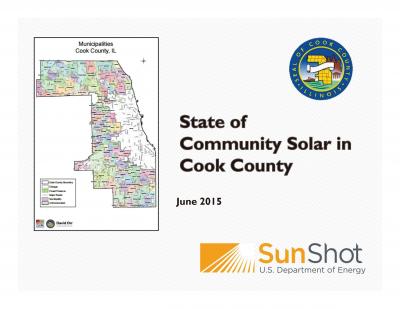 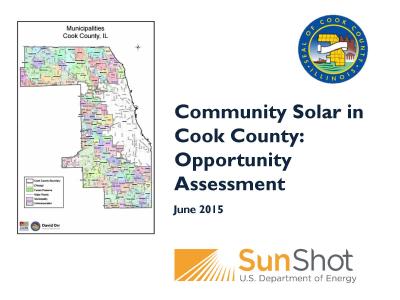 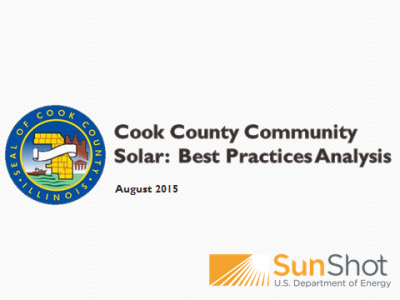 This meeting of the Stakeholder Advisory Group featured presentations from Anthony Star of the Illinois Power Agency and Bradley Klein of the Environmental Law and Policy Center on the Future Energy Jobs Act and its potential for expanding the market for Community Solar in Illinois.  Jim Eckert of ComEd presented on their interconnection process for distributed generation.  Finally, the project team gave updates on project deliverables including the value proposition for community solar and the selected pilot sites which will be used for case studies.

The Project Team presented current deliverables and a panel discussion was held focusing on issues for site owners to consider regarding hosting a community solar project.

Three Working Groups, representing the participation of more than 80 stakeholders, presented their findings from meetings held over the last five months on community solar business models, policy and outreach and education. Manuel Avendano from ComEd presented critical information on the impact of community solar on the electricity network.  Project partners gave updates on project progress to date and next steps including site discovery and pilot development.

The U.S. Department of Energy SunShot Initiative is a collaborative national effort that aggressively drives innovation to make solar energy fully cost-competitive with traditional energy sources before the end of the decade. Through SunShot, the Energy Department supports efforts by private companies, universities, and national laboratories to drive down the cost of solar electricity to $0.06 per kilowatt-hour. Learn more at energy.gov/sunshot.     As of December 1, 2017, the Cook County Department of Environmental Control is now the Department of Environment and Sustainability