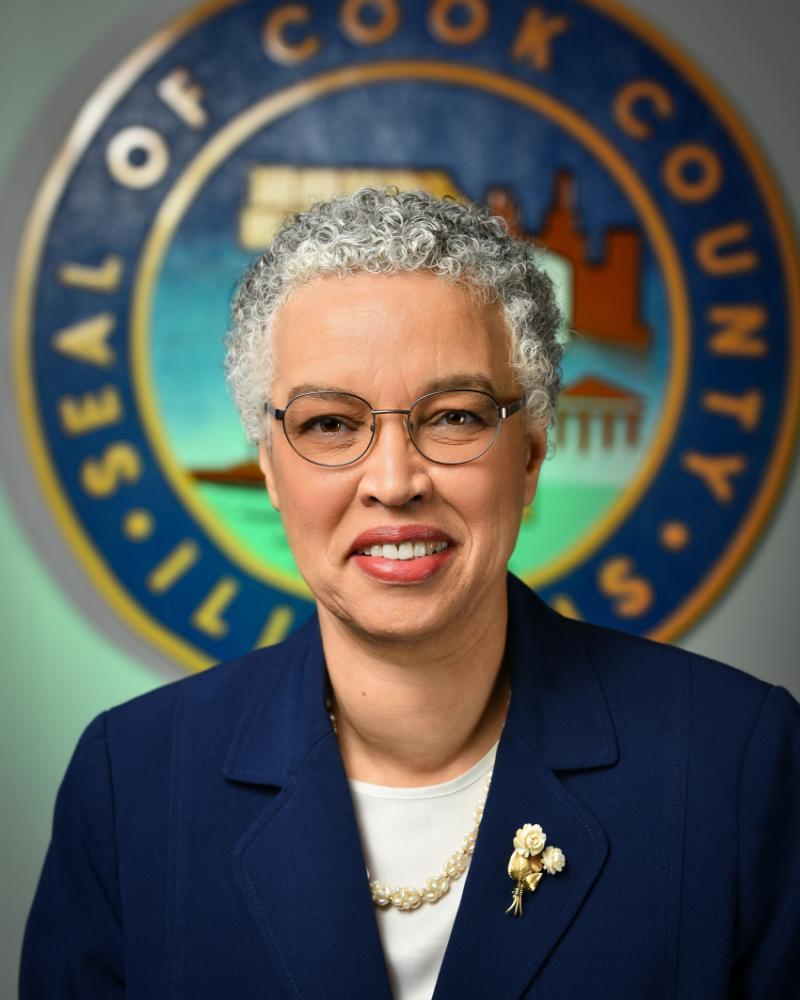 Office of the President

Toni Preckwinkle is the 35th president of the Cook County Board of Commissioners, an office she has held since 2010. She is the first Black woman to be elected to the office. A dedicated and effective public servant, President Preckwinkle has worked to transform County government through increased fiscal responsibility, transparency, and improved services.

Leveraging more than 30 years of political experience and leadership, President Preckwinkle has restored credibility to County government, solving for more than $2.87 billion in budget deficits and providing supplemental pension payments of almost $2 billion above the required contribution since 2016, significantly reducing unfunded pension liabilities.

Under her leadership, Cook County used the Affordable Care Act to create CountyCare, a managed care program for Medicaid-eligible residents. Cook County provides quality care to more than 500,000 individuals through the health system and health plan.

President Preckwinkle has remained committed to reimagining our criminal justice system and taking an approach that also addresses mental health issues, substance abuse and addiction as illnesses to be treated, not crimes to be punished.

During President Preckwinkle’s administration, she has worked to expand the scope of the Justice Advisory Council (JAC) to coordinate and implement juvenile justice reform and public safety policy. In coordination with the JAC, President Preckwinkle has worked collaboratively with the County’s public safety stakeholders towards the goals of safely reducing the population of the Cook County Jail and Cook County Juvenile Temporary Detention Center while preserving public safety, reducing recidivism, and promoting fair and equitable access to justice.

Cook County represents the core of the region’s population, jobs, businesses and productivity. The economic footprint of the Chicago region is larger than that of most nations in the world. One of the great strengths of Cook County, and the larger region, is the diversity of the local economy. In 2011, President Preckwinkle created the Bureau of Economic Development to lead and promote equitable economic growth and community development throughout the County.

Promoting equity, specifically racial equity, has been a central principle of President Preckwinkle’s leadership. In November 2018, the Office of the President released the Cook County Policy Roadmap: Five-Year Strategic Plan for Offices Under the President to guide her administration’s policy and equity work.

President Preckwinkle is also President of the Forest Preserves of Cook County, one of the oldest and largest forest preserve districts in the United States. The district receives an estimated 62 million visits each year, providing residents with outdoor recreation and environmental education opportunities.

Before she was elected Cook County Board President, President Preckwinkle served 19 years as Alderman of the 4th Ward. As Alderman, she oversaw the redevelopment of the Kenwood, Oakland, Douglas, Grand Boulevard and Hyde Park neighborhoods. She established a reputation as a progressive on the City Council and a champion for affordable housing. She was a co-sponsor of the living wage ordinances that passed the City Council in 1998 and 2002.

Prior to holding elected office, President Preckwinkle was a high school history teacher for ten years, before serving as an economic development coordinator for the City of Chicago and the executive director of the Chicago Jobs Council. A native of St. Paul, Minnesota, President Preckwinkle came to Chicago to attend the University of Chicago, from where she holds Bachelor’s and Master’s degrees. She is the proud mother of two and grandmother of three.